And Then I Fed my Father’s Dog. 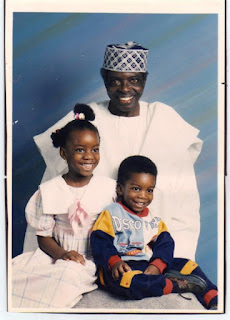 He had a booming laugh,

He was a very handsome man and he knew it.

He knew how to read the minds of a toddler and the kinds of play that they loved,

And he would join in with them and go on forever.

Such was my father’s love.

Symbiotic in your preschool years but freeing after your first day of school.

He loved to hold court, surrounded by his children while the gifted one of us told of folklore.

He did love his beer, as he sat bare-chested in the evening cooling air, but I hated to rub his back.

I didn’t understand him, I was a child and he towered and as such scared me.

He loved his dog Tiger to distraction, but Tiger had love for him and only him.

I hated that he made me give to Tiger, the bone from my drumstick that I was still working on,

And in his absence, when I called to Tiger to come with me on a walk, it would give me an arrogant baleful look and return to lazying in the sun, stupid dog!!

The background noise of my childhood: my father insisting “let the boy do what he wants to do.”

The other was not happy, "make him do what I want,”

“It’s his life, let the boy do what he would do,” my father pronounced and returned to his newspaper and Tiger, watching the scene, would cozy up to his legs.

Such was my father’s love.  It didn’t take the stance of conquering the world and laying it at my feet.  He left the conquering of the world to me and my soul’s dictates.
His love was neither hovering nor interfering, it was like that of a mother bird, when the time was ripe it kicked you out of the nest.

I did not know this gift at the time, feeling it to be indifference.

I thought I loved just my father’s mother, who fed me till I was seven years old, insisting that the Amala was too hot for me to feed myself.

She insisted that we, the young ones eat in the kitchen by the firewood fueled hearth on cold harmattan mornings.  I love fireplaces till today.

She had baskets and pots of treasures in her room and my pastime was to go through them, 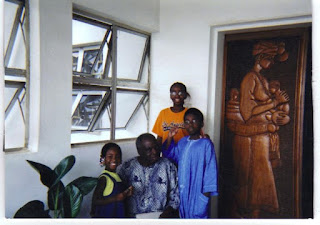 “Are you looking to poke the dead in the eyes?”

Terrified, I would stop for couple of days, but the baskets and pots always beckoned to me,

“Come and we will tell you our secrets.” I did grow up to hunt down secrets.

I thought I loved just his beloved hometown Ogbomosho Ajilete. I learnt the joys of exploration, of free roaming, unencumbered by rules of mothers.

In season, I ate the best mangoes in the world, and paid with diarrhea for days,

I ate at buka all the time and I played till I dropped into comatose sleep.

I thought it was just that I loved my sister; that one made of honey, my pilot of roaming.

Ile Aresin is the name of his family house, and it had been standing eons before my arrival, a treasure house of history.

It houses the dead—we played on their tombstones, the living, there are at least four generations of extended family living there, and the promises of the yet to be born.

I thought it was just that I loved his family house.

I was angry; he never paid me a compliment,

But I came to the insight; he did not need to give me compliments because to him I was perfection.

I got unconditional, unquestioning acceptance from only him—the glint in his eyes always told me this.

I experienced his anger, and it was terrible, he was devalued a lot, his was the time when the love of a father was expected to carry only a sword of thoughts to cut up the world, but his love wore an apron.

I finally arrived, I did love my father, and so when I ran into his beloved dog Tiger in my dreams, I took the time to take him into the house and I fed him.

Feasts of Phantoms a novel by Kehinde Adeola Ayeni -- ISBN 978-0981393926 Available at your local bookstore, a host of online booksellers and directly from Genoa House.