Review of Feasts of Phantoms 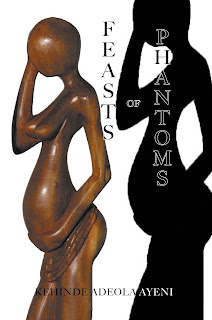 I have been granted a wonderful opportunity to review Feasts of Phantoms by Kehinde Adeola Ayeni, MD.

While I did not provide a review for her first Novel, Our Mothers' Sore Expectations, I did have the fortune to read it.

Feasts of Phatoms brings together Ayeni's passion, the study of the human spirit and the desire to out politcal and social injustices. While her first work Our Mothers' Sore Expectations focused on Nigerian political corruption and its effect on the cultural web that is Nigeria, Feasts of Phantoms examines the psycho-social aspect of genital mutilation through the character Iranti.

Iranti, which means Memory heightens the readers awareness to the layering psychological and physical damage experienced by its victims. Ayeni christens the main character with the strength and fortitude she will require to surmout traumas. Iranti plays the survivor, champion and nurturer as duly expected (and required) to create the vehicle for the author's examination of the horrors that are the outgrowth of genital mutilation.

It is a nod to Ayeni's medical expertise that her ability to relate the mutilation in clinical terms that keeps the reader from being overcome by the experiences. Because of the topic, and the physical complications and limitations placed on the heroine, Eros and other love relationships are given an opportunity to shine. The sister and familial love relationships are developed and examined, but most touching is Iranti's evolved love relationship with Depo, a beloved gay companion.

Ayeni delivers this quote mid-way through her most recent work, Feasts of Phantoms. "Even if a feeling has been made secret, even if it has vanished from memory, can it have disappeared altogether?" (Susan Griffin, A Chorus of Stones).

The quote which, in context, allows the central character, Iranti, to draw the corollaries between her personal experiences as a genital mutilation victim and as physician and savior while on the path to resolve her personal demons.

A review of this book cannot help but be complete without acknowledging Esho, Iranti's de facto mother. While a closing quote is used in the closing lines, it could easily have been used as a simile for Esho's life.

Feasts of Phantoms, her second work relating social and political issues in her native Nigeria, is welcomed and demonstrates her growth and mastery as a literary writer.

Feasts of Phantoms
a novel by Kehinde Adeola Ayeni
-- ISBN 978-0981393926
Available your local bookstore, a host of online booksellers and directly from Genoa House.
Posted by Kehinde Ayeni at 12:51 PM